Apple’s MacBook Air is an all-day computer, with up to 12 hours of battery. It’s incredibly thin and light, meaning that it’s absolutely perfect for somebody on-the-go. Typically, it comes with a rather small amount of storage space, and Apple would seem to like you to buy a new MacBook Air roughly every 3 years. But you don’t have to. By upgrading an existing MacBook Air with a larger Flash Drive, you can easily get another few years. If your battery is starting to wear, we can replace that too. Further down in the article, we’ll even talk about upgrading your RAM or processor – something that Apple does not offer at all.

Inside your MacBook Air, you have a very special type of storage drive. This is a “solid state drive” or “flash drive” in Apple parlance. It stores all your pictures, emails, apps and any other data. It’s not a normal type of SSD you can buy in a shop however, it features a proprietary Apple PCI-Express connection and includes vast improvements over a standard SSD, including hardware encryption and error checking. It’s also really, really fast.

So, finding an upgrade can be rather difficult in itself, but then actually fitting the new SSD requires time and expertise. At SimplyFixIt our Apple certified technicians make things really simple. We’ll give you a fixed price up front for increasing the storage in your MacBook Air, and we’ll even migrate all of your data – so you can pick up right where you left off.

The battery life of an Apple MacBook is something that PC laptop users dream about. It's normal for MacBook Air users to get 12 hours on a single charge, and MacBook Pro users should get several hours, even if the laptop is a few years old. But, the battery life will get worse over time. There is nothing that anybody can do to prevent that. The issue comes when it is time to replace the battery. They are not designed to be replaceable by members of the public, which makes some people think that they are not replaceable at all.

That's not true. The battery in a MacBook, whether it's a MacBook Pro or Air, can be replaced with a new model and many more years use can be had.

How to tell if you need a new Mac battery

The fastest way to check if your MacBook is in need of a new battery is to open System Profiler. This is located in Applications > Utilities and can also be accessed by going to the Apple menu > About This Mac > More Info. Click on the Power section in the list and you’ll find information like the cycle count and condition rating. The condition rating can be "Normal", "Replace Soon", "Replace Now", or "Service Battery". If your battery is listed as anything except, Condition: Normal, then you should replace your battery. 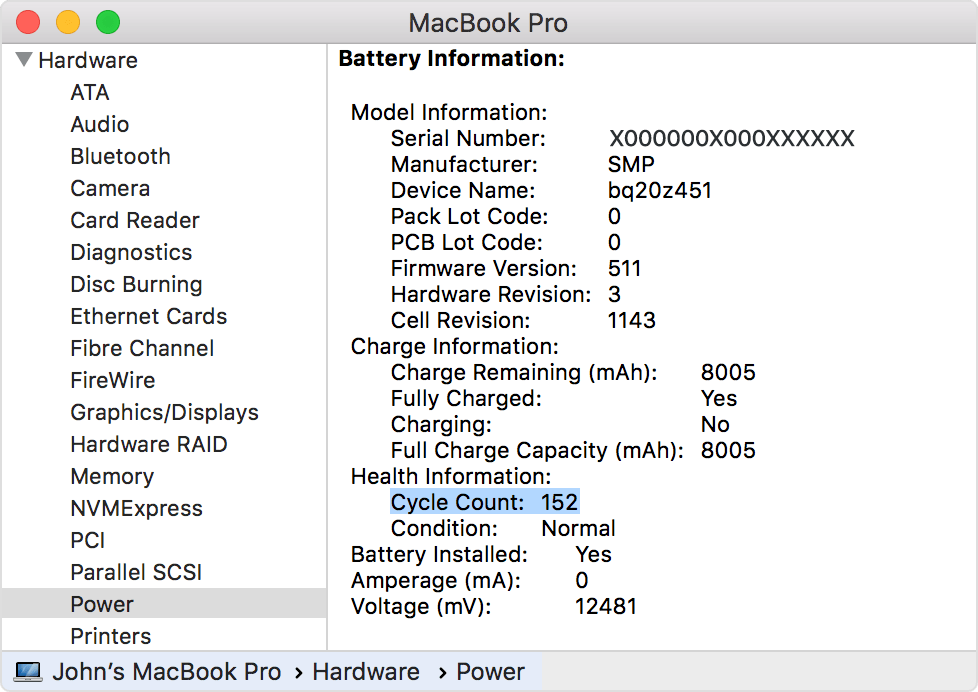 Use of your MacBook battery is counted in the form of charge cycles. A charge cycle means using all of the battery's power, but that doesn't necessarily mean a single charge. For instance, you could use your MacBook for an hour or more one day, using half its charge, and then recharge it fully. If you did the same thing the next day, it would count as one charge cycle, not two, so it may take several days to complete a cycle.

How Much Will it Cost?

If your battery has exceeded 1,000 cycles then it should be replaced. We offer a cheaper, faster service than Apple – but we don’t compromise on quality. Where possible, we use genuine parts and our technicians are also certified by Apple. Same service – simply cheaper.

If you ask Apple, they’ll tell you that it’s not possible to upgrade the processor (CPU) or memory (RAM) inside a MacBook Air. In fact, any MacBook Air or Retina MacBook Pro.

The upgrade is not very straight forward, but at SimplyFixIt, we can help. When Apple designed the Main Logic Board inside, they realised that by soldering parts directly to the circuit board, they can make the overall design much slimmer. That’s the lengths Apple went to in order to make the MacBook Air so thin and light.


What this means is that in order to upgrade the processor or memory, we need to replace the whole Main Logic Board. That makes it a fairly expensive upgrade, but with a new MacBook Air costing a minimum of £949 for an Intel Core i5 processor and 8GB of memory, it’s definitely worth considering. If you would like a quote, get in touch using the contact form below. Please make sure to include the serial number of your MacBook, as well as your desired upgrade (processor and memory). We can change an Intel Core i5 with 4GB memory, into an Intel Core i7 with 8GB memory, for example.