Thanks to a range of new technologies, computers today come with a variety of different devices for storing your data. The three main storage devices today are Hard Drives (commonly referred to as HDDs), Hybrid Drives (also referred to as Fusion Drives or SSHDs), and Solid State Drives (commonly called SSDs, sometimes referred to as Flash Storage). We offer computers with all of these technologies depending on what the system is designed to do. This guide can explain the differences between and advantages of each technology. 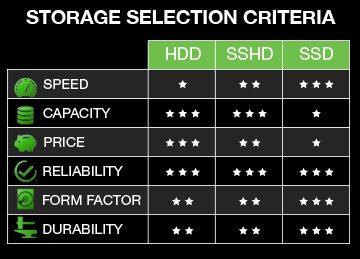 All computer data is stored as 0s and 1s. Everything from your pictures and music to the operating system and programs are stored in this form. Every type of storage stores data in the same way. As storage is by far the slowest part of a computer, it can hold back the computer’s much faster Processor and RAM if it cannot get the data it needs fast enough. Computers can have more than one drive in them, meaning you can combine the benefits of multiple technologies to suit your needs. 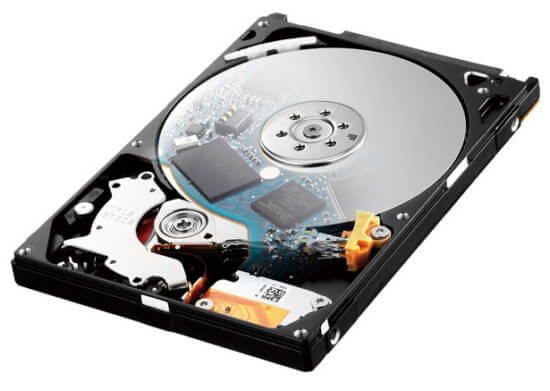 The main advantage of a hard drive is that it’s cheap to store a large amount of data – a good 2TB hard drive usually goes for around £99, whereas a 2TB SSD from a large online retailer is £499 at the time this article was written. It is the most economical way to store a large amount of data. Hard Drives in desktops are also significantly faster than those in laptops, as their larger size allows them to spin faster.

Hard drives have several disadvantages, the main ones being performance and reliability. Given that they are moving parts, Hard Drives have a finite lifespan before they will fail. We usually consider 7 years to be a good ballpark figure of the age you can expect a hard drive to last, but this is influenced by many factors; a few will unfortunately fail sooner, whilst many will last considerably longer. You can find a good report on hard drive reliability from a large online storage company called Backblaze here. As they have to spin, hard drives are considerably slower than other technologies – whilst a computer with a Solid State Drive can boot Windows in around 10 seconds, that same computer with a Hard Drive can easily take 40-50 seconds.

Hard Drives also use more power than some other technologies (important for Laptops where every minute of battery life is important) and generate noise. They do have a couple of other advantages that may not be immediately obvious; should the worst happen to a hard drive it is much easier to recover the data from it than from a Solid State Drive. Hard drives are also available in capacities up to 6-8TB; SSDs will overtake that (Samsung just announced a 16TB one) but it may well be a while before large SSDs are anything resembling affordable. 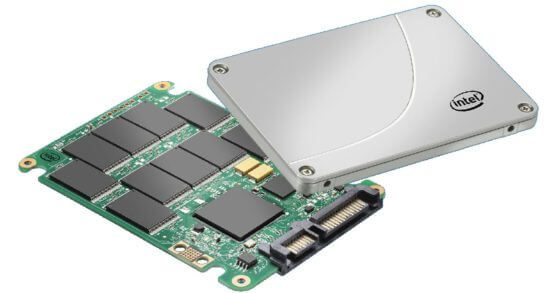 Solid State Drives use chips, not dissimilar to the RAM chips that are already in your computer, to store files. The main difference is that RAM loses your data when it is powered off, whereas SSD chips keep your data even when there is no power.

Solid State Drives use chips, not dissimilar to the RAM chips that are already in your computer, to store files. The main difference is that RAM loses your data when it is powered off, whereas SSD chips keep your data even when there is no power.

Given that they have no moving parts, SSDs are much faster and more reliable than their Hard Drive counterparts. SSDs are one of the best upgrades that can be made to a new or existing computer, as they make a system so much more responsive. Windows will load in around 10 seconds and your programs will snap open instantly. Solid State Drives also benefit from using less power, generating less heat, and being completely silent. Given that there is no moving parts, SSDs are also much more resistant to the knocks and movement that laptops typically experience than conventional hard drives are.

As stated previously, SSDs do cost more than Hard Drives. What can be done is that a system has a smaller SSD in it for Windows and Apps to be installed and a large secondary hard drive where your documents, pictures, and downloads are saved – giving you the best of both worlds.

Still unconvinced about an SSD? This video below by an independent YouTube channel shows the boot time of the same laptop with a Hard Drive and an SSD:

SSHDs combine a conventional hard drive with 8GB of fast Flash Storage, that appears to the computer as just one hard drive. Clever algorithms determine the most important files and move them onto the SSD automatically to make your system work as fast as possible.

Hybrid Drives allow us to make systems, such as our Everyday Computing PC, even more responsive whilst keeping them affordable machines. Hybrid Drives are a good way of increasing performance the responsiveness of a system. Do bear in mind that as they use moving parts, they do not have any of the other advantages of an SSD such as low noise or increased reliability.

Where hybrid drives are not so good is with new data. When writing new data or accessing infrequently used bits, hybrid products perform just like a standard hard drive, and new hybrid drives have a "break-in period" while the software learns which data to cache. Due to the fact that hybrid products rely on caching software, they can also be somewhat more difficult to configure.